Insights from the Tactical Arts Academy
Categories
The selected editor codemirror is not enabled. Defaulting back to codemirror.
×
Print

The Do’s and Don’ts of Surviving a Knife Attack 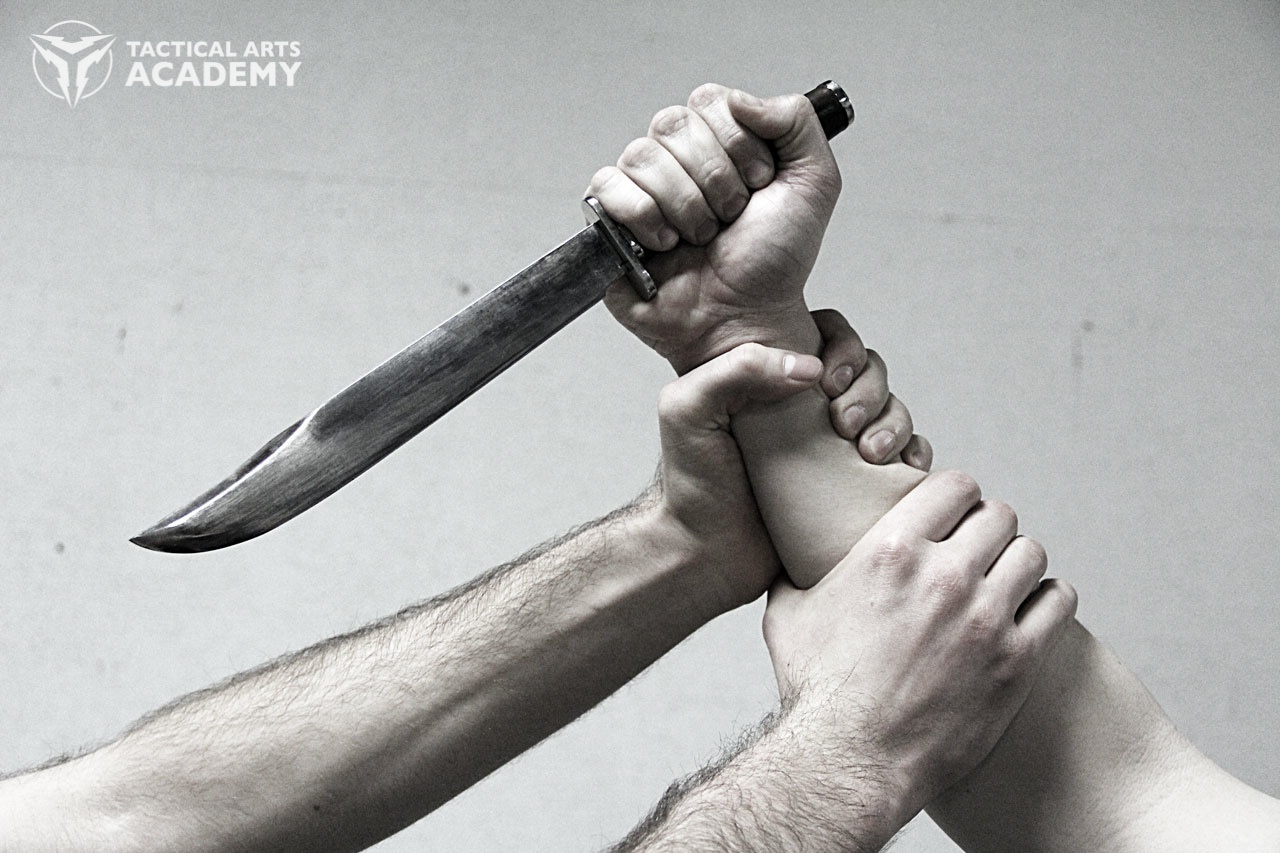 In learning to successfully defend against a knife attack, we must understand as much as we can about the attacks themselves.  The more we know about them, the more we can tailor our training to fit reality.  We must understand the offense in order to plan a defense.

We also have to consider the special dynamics of an attack with a knife.  The knife may be hard to detect, so we may not even know initially that a knife is involved.  A knife can deliver multiple quick lethal slashes and thrusts, so a deadly attack may only last seconds.  Even someone with no training can be lethal.  They just need to be able to touch us.  So we cannot allow our guard to drop even when confronting a weaker opponent.   These factors all must contribute to the design of a self defense approach if it is to have a chance of success.

Regardless of the specific techniques we use, we must have sound tactics.  The tactics we use must make sense and have a margin for error.  If we base our defense on tactics and techniques that are hard to implement, then one small mistake could quickly lead to total failure.  If the tactics are good, then there will be some room for small mistakes and tolerance for the inaccuracy and reduction in quality of performance that occurs during high stress scenarios.

Let’s start with a discussion of the things you should avoid doing during a knife attack - the don’ts.

Block - Don’t block.  Trying to stop a rapidly moving knife is like trying to stop water from flowing: You are going to get wet.  By extending your arm and stopping it, you make it an easy target.  Whether the attacker intended to cut your arm or not, you may still incur nasty defensive wounds.  Even incidental slashes can be debilitating.  The problem does not come from using your arm, it comes from trying to stop something that is so fluid.

Grab - Don’t grab.  Like blocking, trying to control something that is so dynamic can be very difficult, and it can leave your arm at risk of serious injury.  Attempting to grab an attackers knife arm could lead to a severing of your tendons at the wrist, a loss of your digits or a filleting of your tissue.  Imagine you get ahold of your attackers arm, then he jerks his arm away, while cutting yours in the process.

Grabbing can be successful and necessary at times, but it is risky.  When you grab, you have essentially told the attacker that you are going to stay there and fight it out rather than try to disengage.  This makes you an easier target.

Remain stationary - Don’t just stand there.  If you stay there, the attacker can easily continue his attack.  A knife is a close range weapon.  By remaining stationary while you use your arms to defend yourself, you are staying in the optimal range for your attacker to use his knife.  Don't make it easy for him.

Fight toe to toe - Don’t exchange blows back and forth like you are in a fist fight.  There is no tie in a knife fight.  You don't even have a knife, so this is even worse.  You may be able to absorb a punch or two, but you cannot afford to take even one thrust with a knife.  Imagine, if your attacker fails to stab you the first time, he only has to keep trying.  He can fail and try again.  If you fail to stop even one of his thrusts or slashes, you may not get a second chance.

The blade does not respect how tough you are or how strong you are.  Whereas a strength or size advantage may help in confronting an unarmed attacker, it does not give you the same advantage when fighting someone armed with a knife.  You can’t go head-to-head with your attacker, no matter how tough or strong you are, because even if you can ignore the pain, you can easily be injured severely.

Create reactionary lag time - Do something to interrupt your attackers actions or his mind.  You need to slow him down somehow.  Hit him, run, or somehow disrupt his OODA loop.  You need to delay his reactions, so that you have more time to act.  You can create this lag time with some of the tactics mentioned below.

Disengage - Use distance to your advantage by getting out of range.  We find in our force-on-force training that those who disengage are successful more often.  If you create distance, you have more time to react when an attacker comes.  If you are able to run and completely remove yourself from danger, you do not have the risk of making a mistake with your self defense techniques and suffering the consequences.  It’s just easier.

If you stay in and fight, you may prevail, but you will find that the odds of you getting cut are very high.  If you disengage, then you will create some reactionary lag time during which you may be able to arm yourself or at least regain some composure enough to better handle the attack if it continues.

Stun - Use a stun to disrupt your attackers ability to continue his attack and to follow your actions.  A stun will help buy you time to hit your attacker again, to disengage, or to access your weapon.  A quick jab to the eyes or a slap to the face may create an opportunity for you to then follow with a more committed, but powerful strike, such as an elbow to the head or hack to the throat.  Just creating a split second of time for you to then do something else can be very useful.  A stun will make it harder for your attacker to see what you are doing next.

A stun may also change your attacker's role to one that is defensive, so he is reacting to you, rather than you reacting to him.  This is a crucial advantage.

Move offline - Move off of your attacker’s line of attack.  Get out of the way.  If your attacker is coming forward, do not run backwards.  He will run faster than you anyway, and you may fall down over something behind you.  It will be even harder to defend yourself from the ground against a knife attack.  Also, if your attacker has forward momentum in his attack, moving offline will help you gain a little time as he must change his momentum and turn towards you before continuing his attack.

Use angle - Use a change in the angle of position between you and your attacker to your advantage.  Change the angle by flanking your opponent or getting behind him. By moving to your attacker’s side, you can create distance between you and the natural weapons he has on the other side of his body.  In other words, if you move to his right, you get farther away from his left hand and left foot, so it takes longer for him to grab or strike you with those.  Although this delay may only last for a very brief moment, that position to the side can give you a temporary advantage and take away some of his options.  You want to change the angle to limit his options, but give you more.

Move and stun together - Get out of the way and stun at the same time.  Not only will your strikes hit harder, but also you will be harder to hit. If you can help it, do not move, then hit or hit, then move.  Do them simultaneously.  Often people ground themselves to create stability for generating force for a strike.  With a knife, you cannot afford to stop moving.  Learn to strike while moving at the same time. You want to be a difficult target to hit, and you can use your footwork to generate more power for your strikes.

Knowing your enemy is the first step in your defense.  If you know what can happen and what often happens, you can prepare.  How can you block a punch if you do not know what a punch is?  The same is true of any attack.  Keep researching.

Using tactics that give you an advantage and avoiding pitfalls will make it much more likely you will be successful defending yourself.  Regardless of the techniques you use, having the right approach will reduce your disadvantages and give you better chances of survival.  Having an overlap in tactics such as moving offline, using a stun and disengaging will better protect you even when mistakes occur.  If your stun is not very effective, but you get out of your attackers reach, then you are still ok.

It’s all about the training approach.  The best technique in world never work if your training is bad.  You need a program that builds up your understanding and skills, then pushes you to perform them under pressure.

If you are interested in learning more about defense against knife attacks, consider joining the Tactical Arts Academy Filipino Martial Arts Program. It’s focused on training to use and defend against weapons of all types, especially edged weapons. We can help you learn to protect yourself and enjoy making yourself better.